Simon Starling is fascinated by the processes involved in transforming one object or substance into another. He makes objects, installations, and pilgrimage-like journeys which draw out an array of ideas about nature, technology and economics. Starling describes his work as ‘the physical manifestation of a thought process’, revealing hidden histories and relationships.

Kaiser, Philipp: Would you say your work is nostalgic?

Simon Starling: Perhaps its a little bit – in terms of the idea of ‘action’. An artist like Burden has a great belief in the power of action and I suppose I feel an affinity to that idea. I think I have a much less heroic presence than he does and, in fact, generally vanish in the final work. It may sound contradictory, after all our talk about the significance of materials in the work, but the idea of the ‘dematerialised artwork’ is something that is central. My work is about material on a very fundamental level – atom stuff, about atoms. Despite this, or perhaps because of this, Robert Barry and Lawrence Weiner are really important for me. The elegance and precision of a work like Barry’s Inert Gas series (1969) is very attractive to me: on one level its only about matter, about argon, helium but its mediated – matter as information, a poster, a telephone call.

Its ultimately wonderfully contradictory. I think my desert crossing a moped that only creates water is very closely linked to releasing a quantity of inert helium in the Mojave Desert.** 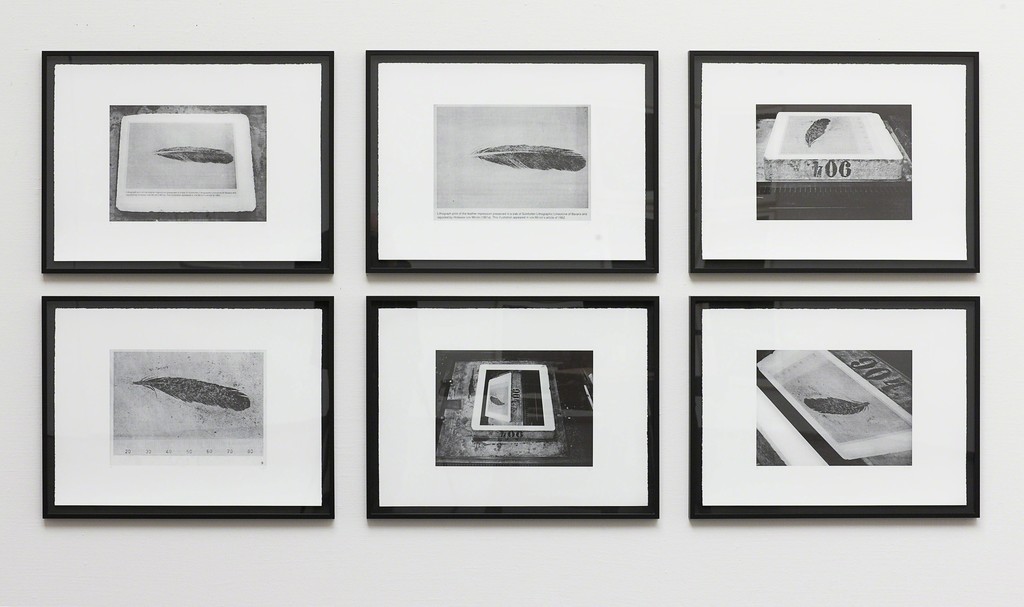 The sometimes self-defeating complexity of Starling’s thought is typified by Archaeopteryx Lithographica (2008-9), a slab of limestone on which he has imprinted a feather from the earliest fossilised bird. It’s important to note that he has used stone from the very Bavarian quarries where the first sensational fossils of Archaeopteryx, the earliest and most primitive bird yet discovered, were found in the 19th century. So in a sense he is taking the creature home – and, since Starling is an artist who insists on making journeys himself, I wouldn’t be surprised to hear he went to Bavaria and back on a homemade bike. The concept feels simultaneously redundant and yet poetic.

**One part of Starlings Turner Prize entry was Tabernas Desert Run, a moped Starling rode across a Spanish desert. The vehicle generated power using only compressed bottled hydrogen and oxygen from the desert air.

The only waste product from the moped’s crossing was water, which he collected in a bottle and later used in a watercolor painting of a cactus he saw on his travels through Andalusia.