“I see myself as a writer, which I am, regardless of what other visual materials I may use. I am a writer first and a visual artist second.” This is apparent in her work which features, over and over, her own handwriting in which she transcribes the writing of others. Darboven’s practice was to scribe every day for hours — just as a monk would, as if in silent prayer.

The vast majority, if not all, of her work is rooted in the calendar; it is inserted inside the structure of time. And works not directly referencing either the calendar or time are often integrated into this system by the handwritten addition of a date.

As a writer, though, Darboven created and used a different  system, one of her own making. She used numbers alongside the repetition of certain words and phrases. Some have mistakenly read these writings literally as if she were actually performing mathematics but this is not the case. In her interview with Miriam Schoofs, Darboven said,“I only use numbers because it is a way of writing without describing. […] It has nothing to do with mathematics, nothing! I choose numbers because they are so constant, confined and artificial.” In other words, she uses numbers because numbers hold less meaning than words and in this way, she is able to avoid, to a certain extent, the myriad of meanings which exists inside a word. In the same way that her installations are not to be read literally, in the same way that they are meant to be seen and not interpreted, her writing is also more about the process and the subsequent visual appearance as a whole, and not as a means to relay information or narrative. As Mel Bochner writes in “The Serial Attitude”  (Artforum, January 1970), “Types of order are forms of thought.” In much the same way as the musicality of a good poem will do the work of relaying the mood and tone regardless of what  it seems to say, Darboven’s writing and installation work can and ought to be read for its patterns and repetitions. It is in this way that one can deduce its true meaning. 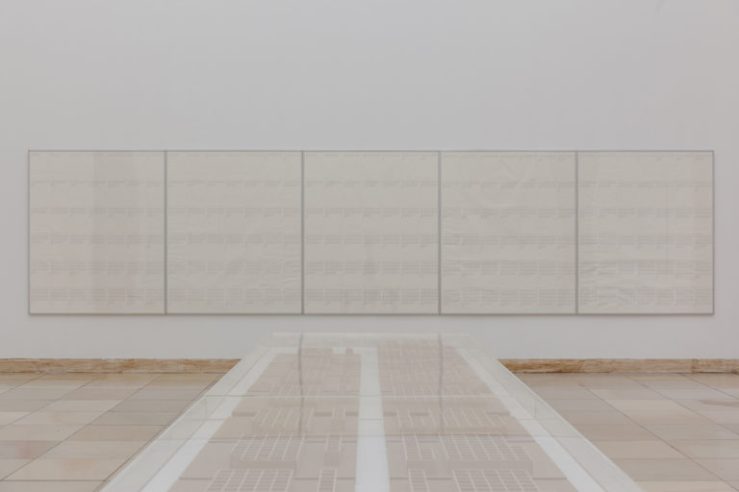 In the case of Darboven and her work, she is the trace; she is the meaning between repetitions and yet she remains unseen, invisible. The concept of trace  implies a sense of movement, the movement from so-called copy to copy, and it is in this movement of copying that Darboven’s artwork exists. Darboven’s creation of a new language, can be read as a form of marking time. And time is trace — it is the invisible, the silent count that is happening all the time. She turns away from the world and decides, instead, to live inside her own world, a new language made of erasure, negation; a world marking time; a kingdom of endless silence.