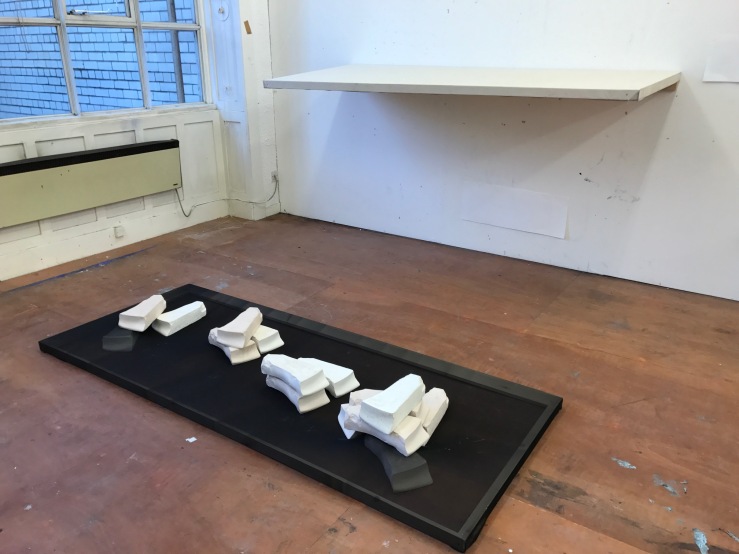 Unfortunately, the more I reflect on my critique, the less confident I feel about it. I have listened to the recording of it multiple times now and I do not think I was eloquent in my perception of the physical work and my ideas. Everything discussed was entirely relevant and the work was well received, however, my intervention was descriptive but uninformative. Annette described the work as a ‘proposition’, and I agreed. Ultimately the work is a demonstration of my own attempt to comprehend my abstract thoughts.

Micheal highlighted the fact that when one speaks through making, one has to be clear. I don’t think my intentions with this work were entirely clear, I am still yet to find clarity within the work myself. At this point, I think I have forgotten what the work is about, and where my specific interests lie. I need to distinguish, once again, where my ideas arise from rather than just illustrating them.

The critique bought me to the conclusion that my work is indeed not about Zen Gardens, the Zen philosophy was merely a tool that I was using to demonstrate my thinking and physical approach to my work through. The work is instead about materiality. Annette suggested it was about illusion, three-dimensionality, and when something becomes an image. The worked also seemed to propose the question of labour, weight, and the value of different actions. How much can I say with one action?

On reflection, I have come to the conclusion that I must refine my ideas from this point on and attempt to be more directional. I struggle with translating everything that I am thinking about into a physical artwork. In my opinion language and conversation is inadequate in depicting experience and translating ambiguous and extensive ideas. I therefore need to find a way of drawing other elements into the work to give it a sensually fluid quality, and attempt to open it up and give it a sense of experimentation.